Back to all posts

My prayer translated in English. "Allah renew my mind, change my ways because in you all who praise and shout for your love are healed. In your name, I am healed; as you are my Christ, My Jesus, My Yeshua and My Redeemer." Repeat my prayer to yourself and experience the blessing.

Quick word.. they're was a religious tale said years ago, that the lion reigned in the jungle with all his might but died alone in his kingdom due to his prideful ways. He didnt die because of his pride but in essence lived in His Glory. Can you make sense of this parable?

The answer to that parable is.. We all have dreams and desire(s) to unify with eachother but in most cases, we as public figures and role models of some sorts, must reign over our desires to be united to prove thyself worthy of our Godship and rulership over debauchery and sin. Here is a second answer that I created into a parable for you. "A gathering of thieves can steal the blessing of queens and kings, queens amongst kings and kings amongst queens; as Gods amongst Gods, Lords amongst Lords, we all must be ready but first prepare to serve eachother."

Let's break that down.. for one, we must all serve the youth in creating more generations to come in our Kingdom. We instill holiness, cleansingness and righteousness in knowing that we are responsible for they're salvation but also keeping to ourselves in knowing we are not. Meaning.. all individuals are responsible for they're own decisions and thoughts. The blood of the innocent resides on no hand for in Adam all do not die but rather, in Adam all are to be judged and convicted for the sins in which they have committed and are to eternally suffer.

How is that the blood of the innocent resides on no hand and in Adam all are not forgiven? God's word is perfect and although pretensed in a sense where He alone knows the past, present and future; the unrighteous were all condemned from the very beginning. #itwaswritten :)

In a brief summary, God is love. He loved the condemned before they were created; in a sense where He still gave them life. He knew that in their genetics; they were warlords who suffered in they're jealousy and greed in not having the power to give unto themselves such as He.

God is not soft, lol. The word of Evil is God but more importantly, the word of all love and righteousness is his first and most important Ministry. What you must understand first, God is a mytholic Warlord but in a sense where He infact is real and not a fiction of imagination. In essence, a huge portion of the Word of God is more so, "disguised" as what we all know as of today, titled as "Greek Mythology", as well. Their are not too many people on this planet that know this to be true but in retrospective, it is infact true. God has many names. #shabah

In Greek Mythology, it is broken down to the world on how Zues (God) reigns as a Warlord in His carnality (flesh), as well. It is also written that Zeus is considered the ruler, protector, and father of all gods and humans. Notice the resemblance to His name as, "Jesus", as well. 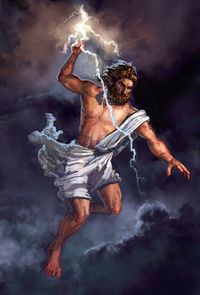 In the bible, it says that the spirit (which is God disguised as the "Holy Spirit") had entered marie and took form as to being Her child (son). It fails to mention that it is infact God portrayed as "Jesus" but subsequently refers to "Jesus" in the bible as the, "Spirit of God". A reminder, in essence, we all know (or should know, lol) that God is Omniscient, Omnipotent, and Omnipresent. Meaning, He can be anywhere at any moment, even in exact replication of Himself at any event but also, as written in the Bible, God has a sense of humor, lol. What the bible had not mentioned, was that marie was discouraged in her design; being that all women were mistreated then or perhaps "prostituted" in Jerusalem. God set out to redeem her by testifying to the world her anointing in becoming her child. In this way, man listened.

What the bible also had failed to mention that Adam (which was God disguised as flesh) testified to the world his liking to women; and in His sense of humor, referred to women (as, "Eve") in eating the fruit and misleading him (Adam) out of his crazed passion into following her. In essence, what the bible also reads, He (God) was deliberately joking into training both man and women then into understanding they're passion for one another, as He (God) had created that particular passion or perhaps, "attraction" to be as shared between both man and women.

In my discernment, I've come to a conclusion on this to be true. In essence, What God had ultimately wanted to establish then was that women had been created from His rib and that all women are to be respected in the most highest of praises and are not to be prostituted. Hence, In the bible.. It was written in the book of Jerimiah 13:27 as quoted in text, "Your adulteries and lustful neighings, your shameless prostitution on the hills and in the fields— I have seen your detestable acts. Woe to you, O Jerusalem! How long will you remain unclean?”